Last night, Gigi and I saw The Agony and Ecstasy of Steve Jobs, a one man show by monologist Mike Daisey. In it, he tells two concurrent stories: Steve Job’s rise to and fall from and rise to power at Apple and Daisey’s own trip to Chinese village Shenzhen, where and its Foxconn factory. This show changed my life. 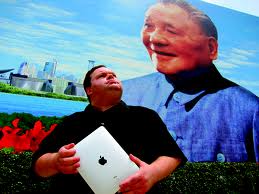 Steve Jobs is the scapegoat in this story he’s Steve Jobs. We know him. He is also the scapegoat because he promised us his Apple factories were like the “after” of the Beverly Hillbillies lives, full of swimming pools and movie stars. We now know that the people who make our iPads and iPhones are not taking splashing each other in the shallow end between shifts, but are instead dying on the assembly line after 36 hours of straight work. We know that Apple knew that people in Shenzhen at the Foxconn plant were gnarling their hands to the point of uselessness repeating the same tiny movements to create the same tiny part for our Mac Book Pros. We know that endless working hours were driving people to suicide at such an alarming rate that Foxconn had to put a net over their roof to keep people from jumping off.

In the wake of scandal, Apple is going to get a lot of flack. 15 people are going to boycott by not getting their iPhone upgrades the first day that they are eligible. But those people have missed the point. Nearly everything we wear, run in, text on, listen to and flaunt is made on the backs of cheap labor. It’s easy to imagine cheap labor as a color or a generic blob of impoverished, uneducated, non-English speakers. Cheap labor is actually a collection of individuals who are being exploited. The 13 year old girl who polished the screen of my Blackberry has a favorite food. Trite, but true.

Mike Daisey is a son of a bitch who will ruin all of your favorite gadgets. I can never look at my Blackberry or my laptop the same way. Never again can I covet the iPhone with the same shameless voracity. Nor should I. Mr. Daisey doesn’t want us to stop using our toys. We would all have to become Amish to avoid products made by exploited labor (it’s easy to mock the Amish in a blog because if they’re practicing properly, they’ll never read it). But we should know where stuff comes from and what it costs another human being to produce it. And we need to think about what each of us can do to help.

For more information from a real source, read this New York Times Article.

For a much more entertaining version of this sad tale, go to The Public Theater’s website for tickets.

2 thoughts on “We’ve Got Trouble My Friends”

These are a few of my favorite posts...

Tales of Days Gone By…

Error: Twitter did not respond. Please wait a few minutes and refresh this page.

On the advice of my legal counsel (Ms. Louise of Louisiana, thank you very much!): Very few of the pictures, drawings and cartoons on this site are my own. I take them from whatever pops up on Google. The thoughts and captions are, however, almost always mine.
Loading Comments...
Comment
×
<span>%d</span> bloggers like this: