My parents’ cats, Bernie and Nigel, are rescue kitties. They came from a shelter to live in a nice house with food and literally more snuggles than they know what to do with. These cats have more advantages than most cats in the world and yet I’ll tell you that neither of them gives a shit about animal rights. 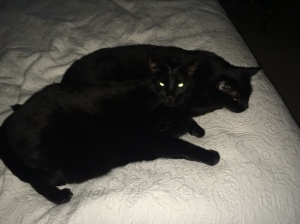 Not one fuck to give between them.

Even though they benefitted from being rescued by a no-kill shelter. Even though since their adoption, my dad has officially become a “cat person”. Even though they are the first cats in my family to be allowed to sleep on the dining room table. You might say that not being activists in the face of all that privilege makes them horrible monsters. But you’d be wrong, because they are cats. Nigel sometimes thinks his reflection is a second cat. Bernie is afraid of the crinkle of tin foil. They aren’t capable of nuanced discussion about how to make life better for other cats and dogs who haven’t had as many advantages as they have.

Bernie in the lap of luxury.

The female protagonist on CBS’s “The Big Bang Theory”, Kaley Cuoco, is the highest paid actress in television. She netted $11 million in 2013 from her role on “Big Bang” and the approximately one million times a day it airs in syndication and from playing William Shatner’s daughter on Priceline commercials and shilling for Toyota. This woman has more autonomy than most women in the world and yet I’ll tell you that Kaley Cuoco is not a feminist. Even though she has the ability to work and be a wife. Even though she has free agency over her own body including the right to get breast implants and cut and dye her hair whenever she wants. Even though she played a witch on “Charmed” and wasn’t burned at the stake.

You might say that not officially taking a stand that women deserve to be treated equally in the face of all that privilege makes Kaley Cuoco a horrible monster. But guys, Kaley Cuoco can’t grasp that her right to choose to make dinner for her husband every night and feel that that’s a special thing is part of feminism. Kaley Cuoco can’t understand that having parents who prioritized her career and education even though she is an XX chromosome-haver is an incredibly lucky life. Kaley Cuoco doesn’t understand what the word “context” means. So let’s not jump all over Kaley Cuoco. No one is abandoning feminism because she crinkles her nose adorably at it any more than animal rights activists are abandoning the cause because Bernie and Nigel would rather chase a laser on the floor than go to one goddamn rally, even if you ask them really nicely.

These are a few of my favorite posts...

Tales of Days Gone By…

Error: Twitter did not respond. Please wait a few minutes and refresh this page.

On the advice of my legal counsel (Ms. Louise of Louisiana, thank you very much!): Very few of the pictures, drawings and cartoons on this site are my own. I take them from whatever pops up on Google. The thoughts and captions are, however, almost always mine.
%d bloggers like this: